Another important talk – why i wasn’t around today 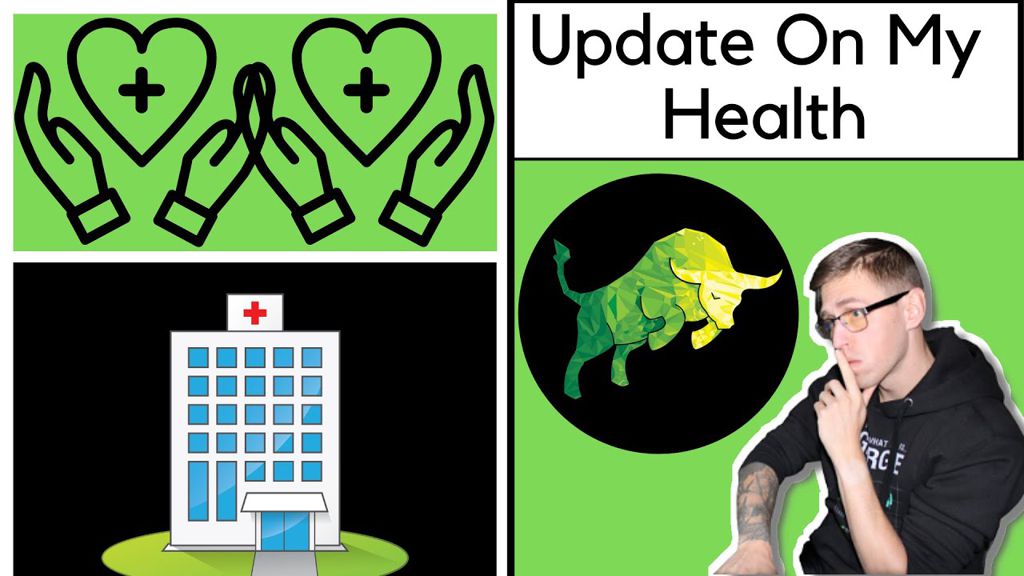 In this video, I give a quick update as to why I wasn't around today.
///2 Free Stocks With $100 Deposit on Webull: https://urldefense.proofpoint.com/v2/url?u=https-3A__act.webull.com_kol-2Dus_share.html-3Fhl-3Den-26inviteCode-3DL4WlkRlNSpq9&d=DwMFaQ&c=Cvk6809QJWx44KVfpEaK-g&r=WvHm_KUWY-5rYypz9lc11RPIWuEX26tGs4FSufOcQ6Q&m=CzjGh75jtR2p1-S5aqqE9WWRG4wV91NMNdsV_wx9og0&s=13Mfa7o3MYeMegZyHTP4NUyLnt7m8diVPXfSA6uvMh8&e=
///My Computer Setup For Investing: iBuyPower PC: https://amzn.to/3pdSm5B Elgato 3 Microphone: https://amzn.to/2Y8HZ75 Wireless Gaming Keyboard: https://amzn.to/3t9tgah
///TubeBuddy Link - A YouTube Analytics site that I personally pay a monthly subscription for, and recommend to anybody looking to maximize their YouTube reach and SEO optimization. TubeBuddy offers a free program, as well as 3 monthly subscription options: Pro, Star, and Legend, all of which offer additional benefits. This link will direct you to TubeBuddy's options, and all monthly subscriptions through this link will directly support the channel through a commission: https://www.tubebuddy.com/TreysTrades
SOCIAL MEDIA Patreon: https://www.patreon.com/TreysTrades
///Venmo: @treystrades
///Twitter: https://twitter.com/TradesTrey
///My StockTwits Page: https://stocktwits.com/TreysTrades
///IG: https://www.instagram.com/trey_collins_001/

What's up everybody, how are we doing? It is uh, it's your boy, trey, i'm just tuning in for a short video. I wanted to give you guys an update. I know that it wasn't around today i wasn't able to do a live stream. I wasn't able to do you know any real video, any real substance or dd, and that is for a reason, so i i did send out a tweet to my twitter and uh.

You know it's my personal discord, uh and i let those people know. I also put a post up on youtube, but i know everybody gets the opportunity to check that sort of stuff out. So i want to take the opportunity to come on and tell you exactly: what's been going on, why i wasn't on today why i didn't live stream today and that's because i've got this condition if you're a new viewer, your new subscriber, i have something called anterior. Uveitis uh, it is an eye condition which which causes inflammation blurry vision, light sensitivity and it's aggregated by uh screen time.

So whenever i look at a screen, for you know, prolonged periods of time, it aggravates it right and i had to go in this morning to get some steroid uh injections. So what they did is they took this? It's i don't remember the exact name of it. I usually take prednisone eye drops, but they just straight up injected my eyes with steroids just to let that inflammation go down. That way, my eye would relax a little bit and let it recover so uh.

Unfortunately, that's that's why i wasn't around today. Uh they told me to stay off the computer for at least 24 hours. Here i am anyways but um. You know i wanted to at least take a couple minutes here to explain why i wasn't around because i know there's some people, especially with today's price action on amc.

I wasn't watching really at all today, but you know i could see it here in the after hours, not looking good in the least bit, but i'll tell you one thing for sure: i'm still holding all 265 shares of my personal amc uh. I have dropped significantly at one point. I was up fifteen thousand dollars and i'm up two thousand: oh, not even uh, yeah, 2173 bucks, so uh it's been a real swing and nonetheless i i don't plan on selling and i'm not freaking, leaving so um. I i don't think it's a dead cat.

It was a tough day, i'm gon na be honest with you. I did not expect the price action we saw on amc today. I don't think anybody really did um, but nonetheless it happened right and that's that it is what it is. It doesn't change the game for us.

In fact, if you look at the short bar a few uh, the short bar free rate, it did go up a little bit. We had the short share. Availability also go down uh and that's what i'm gon na say about that right, i'll, be back to continue. Our regularly scheduled programming tomorrow, i do plan on live streaming tomorrow, to talk more about stocks, to talk, amc, the whole nine yards with my personal job and with work i am going to have some more free time to be able to at least tomorrow tomorrow.

I will uh to be able to live stream, so i'll be able to stick around for a little while. I don't know what i'm gon na hop on exactly i will. You know put that uh that i'll get that video ready about a half hour to hour ahead of time. Just so you guys can be ready to watch that and be ready for the you know the price action we're gon na have so that's what's been going on with me.
My eyes are doing okay, they're good enough now to keep open. When i woke up this morning, guys i'll tell you what i uh i put down like freaking for ibuprofen uh, just because i was in really rough shape. It did not feel good, so um, that's what that is, and then i had something sent to me that i kind of wanted to address as well, and it was this tweet coming from that spam. That fake account that impersonation account uh, who is impersonating me on twitter and for whatever reason or another guy has like these same amount of followers that i do um.

Maybe it's just confusing. Maybe people don't realize that it's not me, but nonetheless it was a tweet saying i have sold my position. That's why i didn't live stream today, thanks guys whatever that. Wasn't me obviously, and that's coming straight from the horse's mouth i will.

I will tell you guys every single day that i did not sell right and uh. That is just factual. I have not sold and i don't plan on selling until it's either a meets its potential or b uh. We don't end up, you know every the game changes we, we see that we have lost the battle and at that point i'll accept that it was an l, but i don't think that's where we're at right now - and i i want to you know - be forth Forthright and say that so um, those are the main topics that i wanted to cover today and then one last thing that i do want to say: you know for anybody out there who's struggling anytime.

I talk about my anterior uveitis or my heart condition right. My heart issues my health issues. I always have people out there that say man, it's i i feel for you, because i've had eye issues. I've had heart issues.

I lost my mom to this. I lost my dad to that. I've got a family member who has these issues right and my response to you is your your personal situation, your personal health, your circumstances right. You can't control that um, that's an untangible, controllable thing.

I can't control the fact that my eyes do this. I can't control the fact that my heart does this right. It's just something that has been handed to me and i have to make the best with that deck of cards. Um people in life sometimes get head starts, and there are people in life that sometimes have obstacles in their way that other people won't have, and that doesn't mean that you can't get to the end goal.

That doesn't mean that you can't win the race. That doesn't mean that you can't uh, you know, be successful and that's kind of like what i got. What i kind of want to say is you know unless there's like a dire circumstance in which it completely takes you out of the race uh right, you have no option but to drop out, which is not where i'm at right. Now it's not where most people are at you, don't you know a lot of times.
You've got a choice and my choice personally is to keep doing what i'm doing. I'm not going anywhere right, i'm going to keep doing youtube, i'm going to find a way to make this eye condition better, no matter what it takes, how long it takes right, i'm not going anywhere and if you're in a similar situation right now, just know that I'm in your corner and you've got people in your corner and keep freaking pushing because you're going to eventually get where you want to go. Regardless of the obstacles in front of you, so um, you know kind of a bride overview video. I want to make this short sweet to the point uh.

Just let you guys know that. That's why i was not around today. In case you weren't able to catch. You know my my my tweets or my discord messages: yada yada um.

So that's what i've got for you guys today, uh, hopefully you're hanging in there you're huddling on uh. I think the majority of apes held today. I think he saw another day of crazy, crazy shorting, especially in the freaking after hours, guys holy toledo, that was nasty. So nasty, not even good nasty like dirty nasty like uh, like you, walk into an airport bathroom - and you get the picture from here like that kind of nasty dude, not good stuff, uh dirty gas station nasty, but anyways we're gon na be fine right.

I'm still holding and until i see a reason to sell uh, i'm just gon na keep hodling on guys. I haven't sold a single share and i'm not going to until the time comes. So that is whatever you guys say. If you enjoyed the video, please drop a like the whole nine yards.

You know the whole deal. I'm not gon na go through the entire spiel, because there was there. Wasn't that much content here. I've got a personal discord down there, five dollars a month.

If you want to join that nice and cheap for anybody who is interested i'll, bring it to the patreon page, i've got a link to the merch store as well. If you want to check that out, and then weeble is the brokerage platform that i use, you can't see it right now, but i'm sure you've seen in other videos if you're a new viewer here. It is a brokerage firm that allows you to start training at 4am the pre-market up until 8pm uh eastern standard time. So great platform gives you the full capability to trade in all market hours, extended hours and regular hours uh.

If you use my link, you'll get two free stocks with 100 deposit i'll receive a free stock, great support the channel. If you are interested and if not my friends, that is totally cool, i'm just glad to have you here, uh watching the video and supporting the channel guys. So my apologies again for not being around today. Hopefully you guys understand, i know, there's a million apes out there.
That said trey. You really got to put your. You got to get your stuff together, man and i'm listening, i'm listening so um. That's that's why i wasn't around today, but i do anticipate being back tomorrow, so um with that being said, thanks for watching my friends i'll see you on the next one and peace.

The world lies in this man’s hands…

Why i bought calls

The world lies in this man’s hands…

Why i bought calls